Greek Origins of Name:  Coleoptera, derived from the Greek words “koleos” meaning sheath and “ptera” meaning wings, refers to the modified front wings which serve as protective covers for the membranous hind wings. 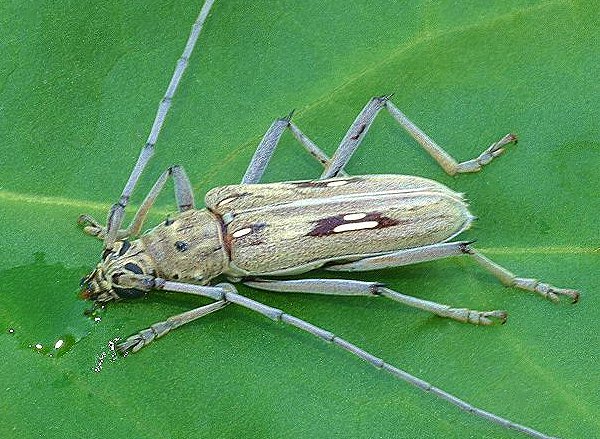 Development:  Holometabola i.e. complete metamorphosis (egg, larva, pupa, adult)
Taxonomy: Coleoptera is divided into four suborders but only two of these, Aedephaga and Polyphaga, include common families:
1. Aedephaga – the first abdominal sternum is divided by the hind coxae
2. Polyphaga – the first abdominal sternum is undivided
Distribution:  Worldwide. This is the largest order of insects. Approximately 112 families and 23,592 species in North America and 166 families and >300,000 species worldwide

Coleoptera (beetles and weevils) is the largest order in the class Insecta. As adults, most beetles have a hard, dense exoskeleton that covers and protects most of their body surface. The front wings, known as elytra, are just as hard as the rest of the exoskeleton. They fold down over the abdomen and serve as protective covers for the large, membranous hind wings. At rest, both elytra meet along the middle of the back, forming a straight line that is probably the most distinctive characteristics of the order. During flight, the elytra are held out to the sides of the body where they provide a certain amount of aerodynamic stability.

Both larvae and adults have strong mandibulate mouthparts. As a group, they feed on a wide variety of diets, inhabit all terrestrial and fresh-water environments, and exhibit a number of different life styles. Many species are herbivores — variously adapted to feed on the roots, stems, leaves, or reproductive structures of their host plants. Some species live on fungi, others burrow into plant tissues, still others excavate tunnels in wood or under bark. Many beetles are predators. They live in the soil or on vegetation and attack a wide variety of invertebrate hosts. Some beetles are scavengers, feeding primarily on carrion, fecal material, decaying wood, or other dead organic matter. There are even a few parasitic beetles — some are internal parasites of other insects, some invade the nests of ants or termites, and some are external parasites of mammals. 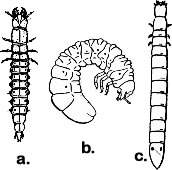 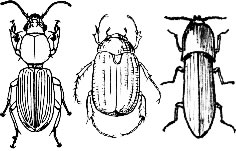 Many beetles are regarded as major pests of agricultural plants and stored products. They attack all parts of living plants as well as processed fibers, grains, and wood products. Scavengers and wood boring beetles are useful as decomposers and recyclers of organic nutrients. Predatory species, such as lady beetles, are important biological control agents of aphids and scale insects.

The following ten families include about 70% of the North American beetle fauna:

Other noteworthy families include:

The royal goliath beetle (Goliathus regius) is a native of western Africa. These beetles are the heaviest of all insects, yet they are strong fliers that buzz loudly when visiting flowers for nectar and pollen. The larvae live in the soil where they feed on roots. This stamp was issued by the government of Togo on May 2, 1955 to commemorate the International Exposition for Wildlife Protection held that year in Paris, France.