Greek Origins of Name:  Heteroptera, derived from the Greek “hetero-” meaning different and “ptera” meaning wings, refers to the fact that the texture of the front wings is different near the base (leathery) than at the apex (membranous). 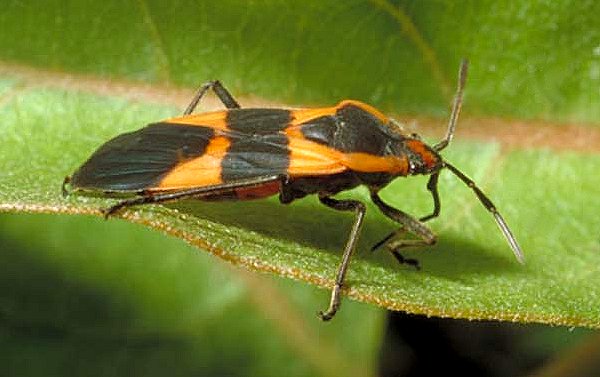 Members of the suborder Heteroptera are known as “true bugs”. They have very distinctive front wings, called hemelytra, in which the basal half is leathery and the apical half is membranous. At rest, these wings cross over one another to lie flat along the insect’s back. These insects also have elongate, piercing-sucking mouthparts which arise from the ventral (hypognathous) or anterior (prognathous) part of the head capsule. The mandibles and maxillae are long and thread-like, interlocking with one another to form a flexible feeding tube (proboscis) that is no more than 0.1 mm in diameter yet contains both a food channel and a salivary channel. These stylets are enclosed within a protective sheath (the labium) that shortens or retracts during feeding.

The Heteroptera include a diverse assemblage of insects that have become adapted to a broad range of habitats — terrestrial, aquatic and semi-aquatic. Terrestrial species are often associated with plants. They feed in vascular tissues or on the nutrients stored within seeds. Other species live as scavengers in the soil or underground in caves or ant nests. Still others are predators on a variety of small arthropods. A few species even feed on the blood of vertebrates. Bed bugs, and other members of the family Cimicidae, live exclusively as ectoparasites on birds and mammals (including humans). Aquatic Heteroptera can be found on the surface of both fresh and salt water, near shorelines, or beneath the water surface in nearly all freshwater habitats. With only a few exceptions, these insects are predators of other aquatic organisms. 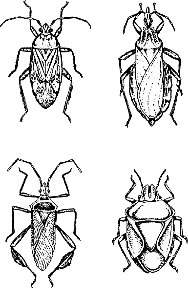 Plant feeding bugs are important pests of many crop plants. They may cause localized injury to plant tissues, they may weaken plants by removing sap, and they may also transmit plant pathogens. Predatory species of Heteroptera are generally regarded as beneficial insects, but those that feed on blood may transmit human diseases. Chagas disease, for example, is transmitted to humans by conenose bugs (genus Triatoma, family Reduviidae). Although bed bugs (family Cimicidae) can inflict annoying bites, there is little evidence that they regularly transmit any human or animal pathogen.

The three largest families of Heteroptera are:

Other families of terrestrial herbivores include:

Other families of terrestrial predators include:

The major families of aquatic predators include: 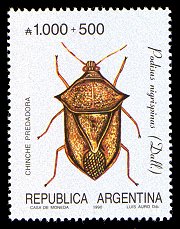 The blackspined soldier bug (Podisus nigrispinus) is a predatory stink bug (family Pentatomidae). This stamp, and three others that depict beneficial insects, was issued by Argentina in 1990.