Greek Origins of Name:  Odonata, derived from the Greek “odonto-“, meaning tooth, refers to the strong teeth found on the mandibles of most adults. 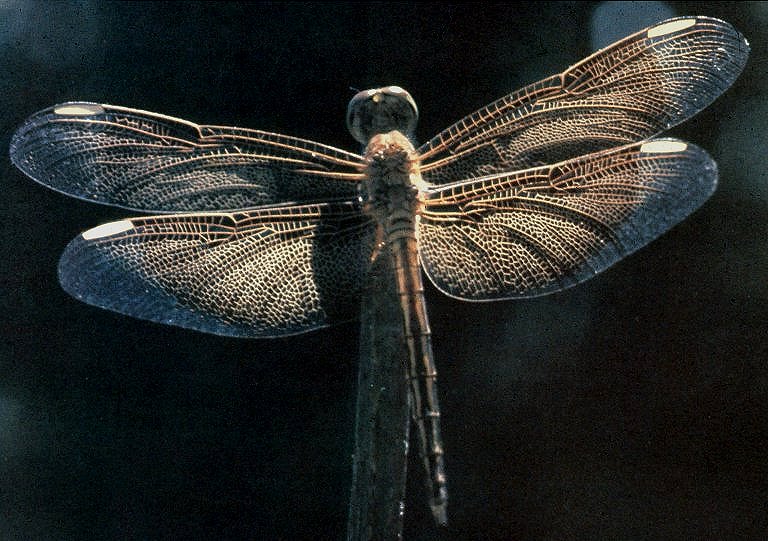 Development:  Hemimetabola,  i.e. incomplete metamorphosis (egg, nymph, adult);  immatures are aquatic (naiads)
Taxonomy: Paleoptera, primitive wing structure and venation lacking the ability to fold the wings over the back.
Two suborders:
1. Zygoptera (damselflies) — front and hind wings are similar in shape
2. Anisoptera (dragonflies) — hind wings are broader near the base than the front wings
Distribution:  Common worldwide. Third largest order of insects, with approximately 11 families and 407 species in North America and 29 families and >5000 species worldwide

Dragonflies and damselflies are predaceous both as immatures and adults. The adults are quick, agile fliers that are generally considered beneficial because they feed on large numbers of small, flying insects like gnats and mosquitos. Legs are used either as a basket for catching prey or as grapples for clinging to emergent vegetation. Eggs are laid singly in fresh water; females often hover over open water and dip their abdomen as they oviposit.

Eggs hatch into aquatic immatures (naiads) that feed opportunistically on other forms of aquatic life including mayfly naiads, small crustaceans, annelids, and mollusks. Some of the large dragonfly naiads will even attack small fish and tadpoles. All immature Odonata have a specialized labium for catching prey. Folded under the head and thorax when not in use, the labium can be extended rapidly toward potential prey. Hooked lobes at the tip of the labium grasp or impale the prey and draw it back to the mouth as the labium retracts.

Damselfly naiads are usually more slender than dragonfly naiads and have three leaf-like gills at the end of the abdomen. Dragonfly gills are located internally, within the rectum, where bellows-like contractions of the rectal muscles cause oxygenated water to circulate in and out. 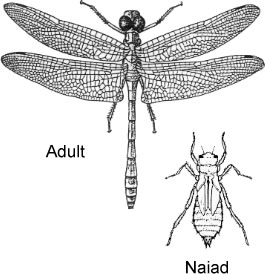 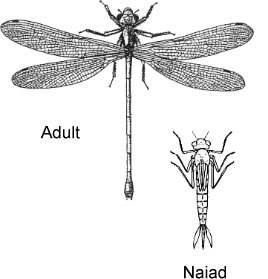 Most dragonflies and damselflies are regarded as beneficial insects because they feed on small flying insects such as mosquitoes. They may also catch and eat honey bees — then they are regarded as pests by the beekeepers.

In some parts of Europe, dragonflies are considered a threat to the poultry industry because they transmit Prosthogonimus pellucidus,a parasitic flatworm. Dragonfly naiads become infected by ingesting cysts of the flatworm. These cysts survive into adulthood of the dragonfly and may spread to birds (particularly poultry) that catch and eat the adult dragonflies. The flatworm cysts dissolve in the bird’s intestine and infection spreads into the cloaca and reproductive organs. The Dutch have a maxim: “Hide the hens, the dragonflies are coming.” 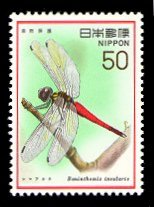 In Japan, this dragonfly (Boninthemis insularis) is known as “Shimaakane”. The Japanese government offically designated this species a national landmark on March 12, 1969. This stamp (one of four in a set illustrating insects) was issued on September 14, 1977.