Greek Origins of Name:  Neuroptera is derived from the Greek word “neuron” meaning sinew and “ptera” meaning wings. The modern English translation “nerve-wings” is appropriate because it alludes to the extensive branching found in the wing veins of most Neuroptera. 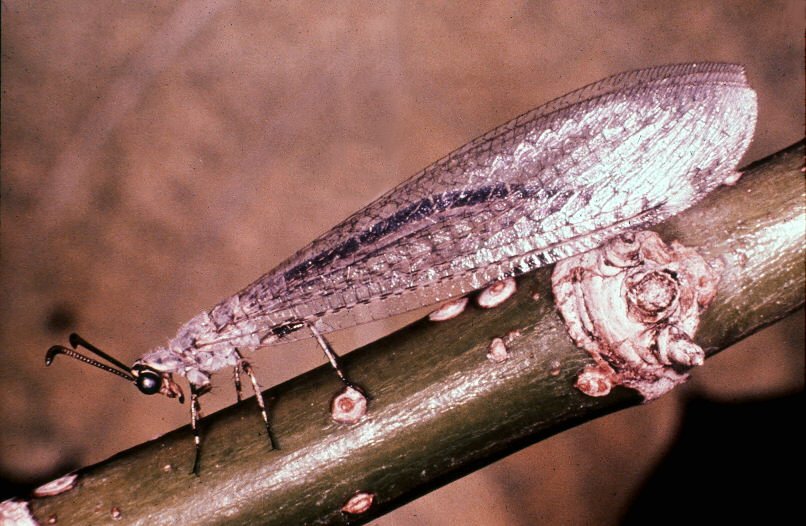 In adults, the suborders are distinguished by mitochondrial DNA
Distribution: Common worldwide, with multiple families

The order Neuroptera includes the lacewings, antlions, mantisflies, and owlflies along with several other minor groups

Except for larval spongillaflies (family Sisyridae) which feed on fresh-water sponges, all members are terrestrial. Antlion larvae live in the soil and construct pitfall traps to snare prey. Lacewing larvae are usually found in vegetation where they typically feed on aphids, mites, and scale insects.  In most cases, the adults of these insects are also predators — the non-predatory species usually feed on nectar, pollen, or honeydew.

The larvae of antlions and lacewings have specialized mouthparts with large, sickle-shaped mandibles and maxillae that interlock to form pincers. Once impaled on these pincers, a prey’s body contents are sucked out through hollow food channels running between the adjacent surfaces of the mandibles and maxillae.

As adults, all neuropterans have two pairs of membranous wings with an extensive pattern of veins and crossveins. At rest, the wings are folded flat over the abdomen or held tent-like over the body. Most species are rather weak fliers. 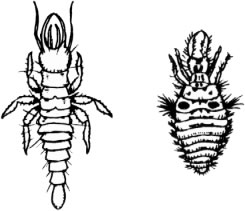 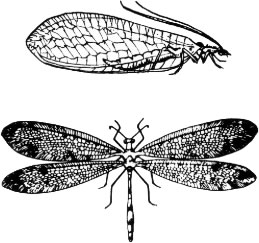 Lacewing larvae are beneficial as predators of agricultural pests (aphids, whiteflies and scale insects). Some species are reared and sold commercially as biocontrol agents. 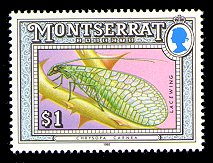 The common green lacewing (Chrysopa carnea) is a predator of aphids in both its adult and larval stages. This beneficial insect is recognized as an important biological control agent throughout much of the world. The stamp pictured here is one of 16 insect stamps issued in 1992 by Montserrat, one of the Leeward Islands in the British West Indies.