Greek Origins of Name:  Thysanoptera, derived from the Greek “thysanos” meaning fringe and “ptera” meaning wings, refers to the slender wings that bear a dense fringe of long hairs. 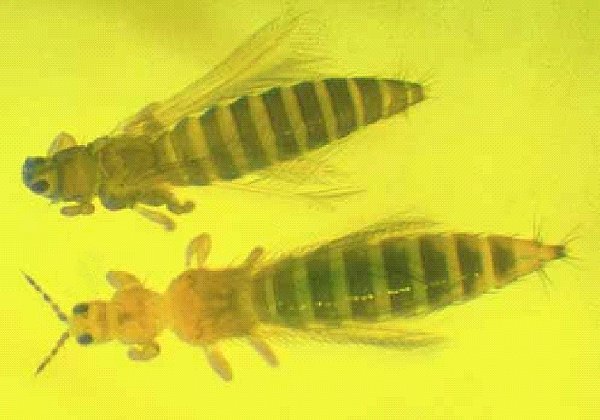 Development:  Hemimetabola, i.e. incomplete metamorphosis (egg, nymph, adult)
Taxonomy: Paraneoptera, closely related to Hemiptera and Psocodea.  Thysanoptera is divided into the two suborders Terebrantia and Tubulifera. The suborders can be distinguished by the shape of the last abdominal segment: short and pointed in the Terebrantia, long and tubular in the Tubulifera.
Distribution:  Common inhabitants of flowers, leaf litter, and fungi throughout the world.  Approximately 5 family and 694 species in North America and 8 family and >4,500 species worldwide

Thrips are generally small insects (under 3 mm). Most species feed on plant tissues (often in flower heads), but some are predators of mites and various small insects (including other thrips). Many species are parthenogenetic. Adults may be winged or wingless. When present, the wings are slender and rod-like with a dense fringe of long hairs.

Although Thysanoptera are hemimetabolous, many species undergo an extended metamorphosis in which the final immature stage is quiescent, non-feeding, and sometimes even enclosed in a silken cocoon. This developmental stage, usually called a “pupa”, has aroused a great deal of speculation by some entomologists who claim that thrips represent an “intermediate” stage between hemi- and holometabolous development. A close examination of the thysanopteran “pupa”, however, reveals that it does not undergo any internal transformation. Without additional evidence to support a phylogenetic link to the Holometabola, it would appear that this “pupal stage” may be nothing more than a curious coincidence of convergent evolution.

Many thrips are destructive pests of plants, especially grain crops, fruits and vegetables, and ornamentals. Feeding activities result in plant deformities, scarring, loss of yield, and in some cases, transmission of plant pathogens. Predatory thrips are beneficial species that may control mites and other small insects.