Greek Origins of Name:  Strepsiptera, derived from the Greek “strepsi” meaning turned or twisted and “ptera” meaning wings, refers to the resting position of the male’s large hind wings. 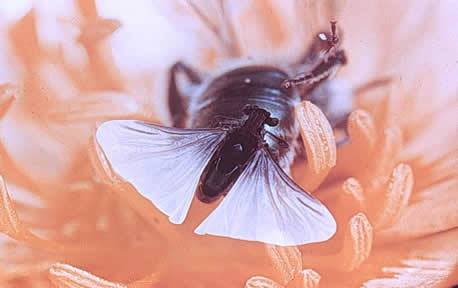 Most Strepsiptera (also known as twisted-wing parasites) live as internal parasites of bees, wasps, grasshoppers, leafhoppers, and other members of the order Hemiptera. Only a few species that parasitize bristletails (Archeognatha) are known to be free-living in the adult stage.

Strepsiptera share so many characteristics with beetles that some entomologists classify them as a superfamily of Coleoptera. In fact, Strepsiptera and certain parasitic beetles (in the families Meloidae and Rhipiphoridae) are among the very few insects that undergo hypermetamorphosis, an unusual type of holometabolous development in which the larvae change body form as they mature. Upon emerging from their mother’s body, the young larvae, called planidia, have six legs and crawl around in search of a suitable host. In species that parasitize bees or wasps, a planidium usually climbs to the top of a flower and waits for a pollinator. When a host arrives, the larva jumps aboard, burrows into its body, and quickly molts into a second stage that has no distinct head, legs, antennae or other insect-like features. These larvae grow and continue to molt inside the host’s body cavity, assimilating nutrients from the blood and non-vital tissues. After pupating in the host, winged males emerge and fly in search of mates. An adult female remains inside her host, managing to attract and mate with a male while only a small portion of her body protrudes from the host’s abdomen. Embryos develop within the female’s body, and a new generation of planidia larvae begin their life cycle by escaping through a brood passage on the underside of her body.

Adult male Strepsiptera are strange-looking insects. The head is small, with protruding compound eyes that look like tiny raspberries. The antennae are multi-segmented and have up to three branches. Front wings are reduced to small, club-like structures; hind wings are very large and fan-shaped. 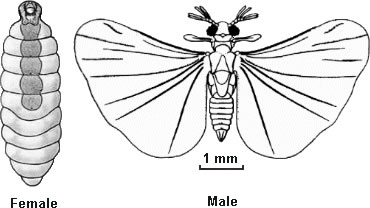 Strepsipterans are not abundant enough to have a significant impact on other insect populations.