Greek Origins of Name:  Siphonaptera is derived from the Greek words “siphon” meaning a tube or pipe and “aptera” meaning wingless. This is an appropriate appellation for these secondarily wingless insects whose mouthparts are adapted for piercing skin and sucking blood. 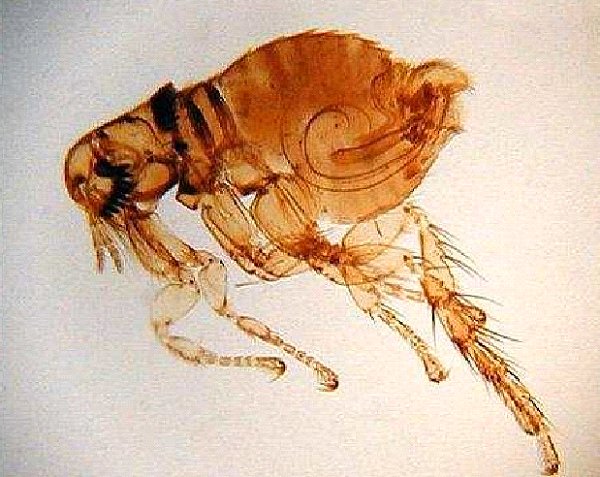 As adults, all fleas are blood-sucking external parasites. Most species feed on mammals, although a few (less than 10%) live on birds. Only adult fleas inhabit the host’s body and feed on its blood. They are active insects with a hard exoskeleton, strong hind legs adapted for jumping, and a laterally flattened body that can move easily within the host’s fur or feathers. Unlike lice, most fleas spend a considerable amount of time away from their host. Adults may live for a year or more and can survive for weeks or months without a blood meal.

Flea larvae are worm-like (vermiform) in shape with a sparse covering of bristles. They rarely live on the body of their host. Instead, they are usually found in its nest or bedding where they feed as scavengers on organic debris (including adult feces). In general, flea larvae can survive more arid conditions than most fly larvae. After a larval period that includes two molts, fleas pupate within a thin silken cocoon. Under favorable conditions, the life cycle can be completed in less than a month. 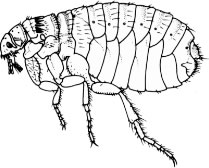 In addition to their irritating bites, fleas may also transmit pathogens that cause disease in humans and other animals. Cat and dog fleas, for example, are intermediate hosts for a tapeworm (Dipylidium caninum) that infects dogs, cats, and humans. Rabbit fleas spread a myxomatosis virus within rabbit populations, and the oriental rat flea is the primary vector of Yersinia (=Pasturella) pestis, the bacterial pathogen for bubonic plague.