Greek Origins of Name:  Plecoptera, derived from the Greek “pleco” meaning folded and “ptera” meaning wing, refers to the pleated hind wings which fold under the front wings when the insect is at rest. 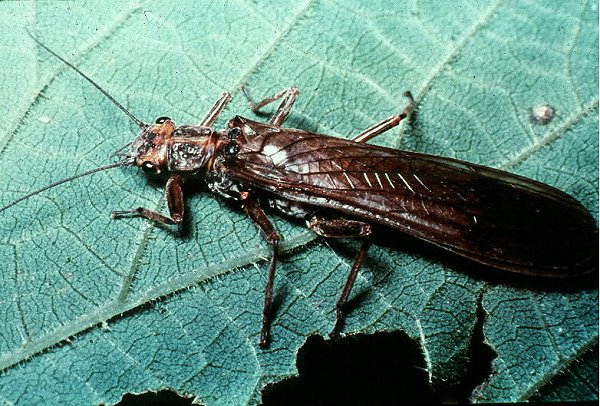 Stoneflies are generally regarded as the earliest group of Neoptera. They probably represent an evolutionary “dead end” that diverged well over 300 million years ago. Immature stoneflies are aquatic nymphs (naiads). They usually live beneath stones in fast-moving, well-aerated water. Oxygen diffuses through the exoskeleton or into tracheal gills located on the thorax, behind the head, or around the anus. Most species feed on algae and other submerged vegetation, but two families (Perlidae and Chloroperlidae) are predators of mayfly nymphs (Ephemeroptera) and other small aquatic insects. Adult stoneflies are generally found on the banks of streams and rivers from which they have emerged. They are not active fliers and usually remain near the ground where they feed on algae or lichens. In many species, the adults are short-lived and do not have functional mouthparts. Stoneflies are most abundant in cool, temperate climates. 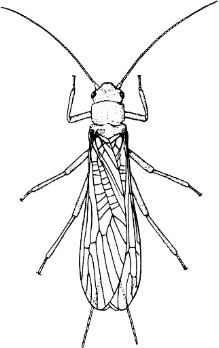 Stoneflies require clean, well-oxygenated water to survive. They are extremely sensitive to water pollution and are used by ecologists as indicators of water purity. Stoneflies are also an important source of food for game fish (e.g., trout and bass) in cold mountain streams. 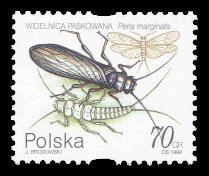 Aquatic insects were the theme for a series of six postage stamps issued by Poland on July 16, 1999. Immature and adult stages in the life cycle of a stonefly (Perla marginata) are depicted on this stamp.