Greek Origins of Name:  Mecoptera, derived from the Greek words “meco” meaning long and “ptera” meaning wings, refers to the shape of both the front and hind wings. 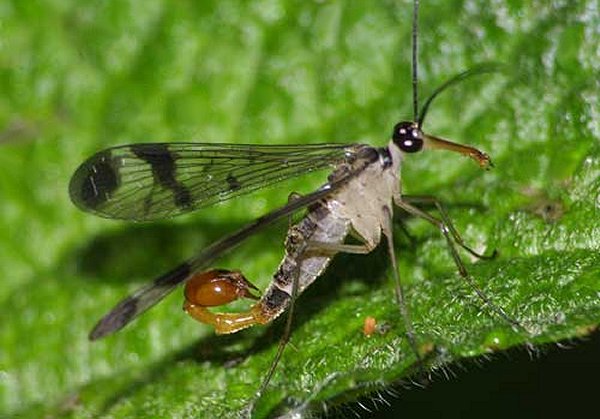 The Mecoptera (scorpionflies) are a curious group of terrestrial insects that usually live in moist sylvan habitats. Both larvae and adults are omnivorous. Mostly, they feed upon decaying vegetation and dead (or dying) insects. Larvae generally remain in the soil; they have chewing mouthparts and resemble caterpillars (Lepidoptera) or white grubs (Coleoptera). Most adults have an elongated head with slender, chewing mouthparts near the tip of a stout beak. Front and hind wings are similar in shape (occasionally reduced in size or absent), and often mottled with patches of color. The common name of this order (scorpionfly) refers to the distinctive appearance of male genitalia in members of the family Panorpidae: the terminal segments are enlarged and held recurved over the abdomen like the tail of a scorpion. Despite its appearance, the scorpionfly’s tail is quite harmless.

Hanging scorpionflies, family Bittacidae, are predators of small flying insects. Their legs, especially the tarsi, are unusually long and slender. At the tip of each leg there is a single opposable claw. The adults hang from vegetation with their front legs and catch small flying insects with their middle and hind legs. These scorpionflies, which bear a striking resemblance to crane flies (Diptera: Tipulidae), may have developed from the same ancestral lineage that also give rise to the caddisflies (order Trichoptera) and the true flies (order Diptera). 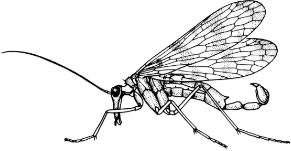 None of the scorpionflies are considered pests. Most species are not abundant enough to have much of an environmental impact. 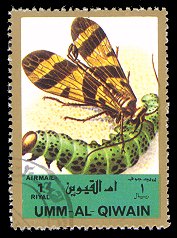 Scorpionflies are scavengers of dead or dying insects. This stamp was issued in 1973 by the sheikdom of Umm Al Qiwain, a member of the United Arab Emirates. It illustrates a male scorpionfly (Panorpa nuptialis) with its distinctive “scorpion-tail” genitalia.