Description:  Hawk moths have a thick body that is covered in hairs and is pointed at the posterior and the anterior end.  The antenna is thickest at its midpoint and may be bipectinate in nature.  The hind wings are much shorter than the forewings.  The forewings are elongate and rather pointed with a posterior angle that is at least 120 degrees.  Some hawk moths are commonly known as hummingbird moths because they hover in front of flowers as they feed on nectar. 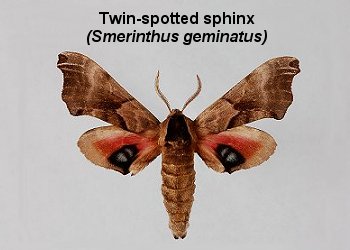