Greek Origins of Name:  Homoptera, derived from the Greek “homo-” meaning uniform and “ptera” meaning wings, refers to the uniform texture of the front wings. 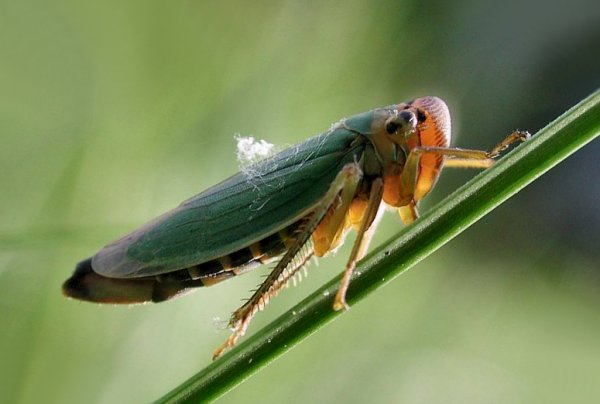 All members of the suborder Homoptera have piercing/sucking mouthparts and feed by withdrawing sap from vascular plants. The proboscis is shorter than that found in true bugs (suborder Heteroptera), and it emerges near the ventral posterior margin of the head capsule (opistognathous). Although some Homoptera are secondarily wingless, the majority have membranous or uniformly textured wings that fold tent-like over the body at rest.

It is difficult to generalize about the biology of these insects. Cicadas are the largest members of the suborder. As nymphs, they live underground and feed on the roots of trees and shrubs. Some species complete development in as little as four years, but others have a 13- or 17-year life cycle. In contrast, the aphids are tiny, soft-bodied insects with multiple generations per year. Many species have complex life cycles involving more than one host plant. Winged and wingless forms of the same species may develop at different times of the year. Asexual reproduction (parthenogenesis) is common and males are unknown in some species. The scale insects are even more specialized. During much of their life cycle, they remain immobile, living beneath an impervious cover of wax or cuticle that they secrete over themselves. Legs and antennae often disappear after the first molt. Only newly hatched nymphs and adult males bear any resemblence to other insects. Females grow to sexual maturity, mate, produce offspring, and die without ever leaving their protective cover.

In most of the Homoptera, a portion of the digestive system is modified into a filter chamber. This structure allows the insects to ingest and process large volumes of plant sap. Excess water, sugars, and certain amino acids bypass most of the midgut and are shunted directly into the hindgut for excretion as honeydew. Only a small volume of filtered plant sap passes through the midgut for digestion and absorption. Many species of ants are attracted by the honeydew and provide care and protection for the homopterans in exchange for the honeydew they excrete. 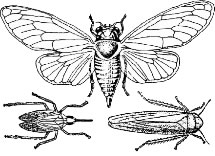 Homoptera are among the most abundant herbivores found in terrestrial habitats. Many species are pests of cultivated plants. Aphids and leafhoppers are important carriers of plant diseases. 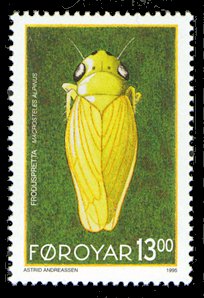 The Faroe Islands are a group of self-governing Danish islands located in the North Atlantic between Great Britain and Iceland. This stamp depicts a leafhopper, Macrosteles alpinus (family Cicindellidae). It is one of four leafhopper stamps issued by the Faroe Islands in 1995.