Greek Origins of Name:  Grylloblattodea, derived from the Greek “gryll” meaning cricket and “blatta” meaning cockroach, refers to the blend of cricket-like and roach-like traits found in these insects. 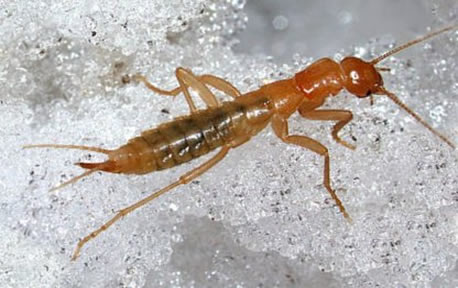 Rock crawlers are a small and obscure group of insects found only at high elevations in the mountains of China, Siberia, Japan, and western United States and Canada. Cave-dwelling species have been found in Korea and Japan. These omnivorous insects scavenge for food on the surface of snowfields, under rocks, or near melting ice. They are active only at cold temperatures and move downward toward permafrost during warm seasons. As their ordinal name implies, rock crawlers have a blend of physical characteristics from both crickets (gryllo-) and cockroaches (blatta-). Some taxonomists include these insects as a suborder or family within Orthoptera. Others believe these insects are the only survivors of a primitive lineage that gave rise to other orthopteroid orders. 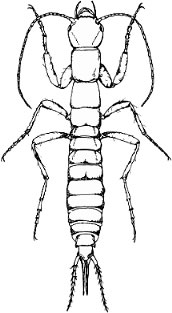 Rock crawlers have no economic importance. They live in places that are not inhabited by humans.

Grylloblattidae is the only family in this order. It contains four genera but only one (Grylloblatta) is found in North America.