Greek Origins of Name:  Ephemeroptera is derived from the Greek “ephemera” meaning short-lived, and “ptera” meaning wings. This is a reference to the short lifespan of most adult mayflies. 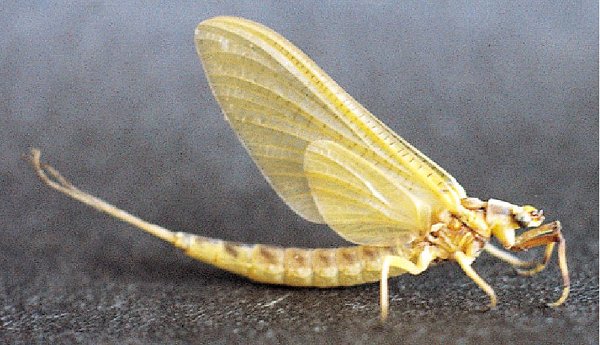 The immature stages of mayflies are aquatic. They generally live in unpolluted habitats with fresh, flowing water. Some species are active swimmers, others are flattened and cling to the underside of stones, a few are burrowers who dig U-shaped tunnels in the sand or mud. Most species are herbivorous. Their diet consists primarily of algae and other aquatic plant life scavenged from surrounding habitat. Some species mature quickly, in as little as four weeks, while others develop more slowly (one to four years per generation).

Once a mayfly completes development as a naiad, it leaves the aquatic environment, often rising to the water surface in a bubble of air. It quickly molts to a winged form (the subimago) and flies to a nearby leaf or stem. The subimago is a brief transitional stage that molts again into a sexually mature adult (imago). The imago usually has transparent wings and a smooth, shiny exoskeleton in contrast to the cloudy wings and dull, pubescent body of the subimago. Mayflies are the only living insects that molt again after they have wings.

Most adults are delicate insects with a very short lifespan. They do not feed (mouthparts are vestigial), and some species emerge, reproduce, and die in a single day. Males generally fly in swarms that undulate in the air 5-15 meters above the ground. Females fly into the swarm and are quickly grabbed by a male. Copulation takes place in flight, and the female usually lays her clutch of eggs within minutes or hours. Males die shortly after mating; females usually die soon after oviposition.

Many northern lakes and rivers (in both the United States and Europe) support unbelievably large populations of mayflies. The naiads are “ecological indicators” of good water quality and are an important source of food for fish and other aquatic wildlife. Anglers often use mayflies as bait, or tie “flies” that are made to resemble the imagos (spinners) or subimagos (dun).

In some mayfly species, summer emergence of winged stages is a sudden and dramatic event that occurs almost simultaneously throughout the entire population. These mass emergences are often regarded as a major nuisance. The insects are attracted to city lights and blown inland by the wind. Their dead bodies pile up in drifts on porches and windowsills; they plaster car windshields and slicken highways. Europeans are often more sanguine than Americans about mass emergences — in some communities the dead insects are diligently gathered up, dried, and sold as bird food, fish bait, or fertilizer. Although mass emergences still occur, the populations are not as large as in the past. Urban development and water pollution in major lakes and streams has dramatically reduced mayfly populations over the past 50 years.

Baetidae — These insects are usually small (less than 10 mm). The naiads are typically found in warm water.
Heptageniidae — Naiads of this common family are usually found under stones in fast-moving water.
Ephemeridae — Adults are among the largest of mayflies. Naiads of this family burrow into the sand. 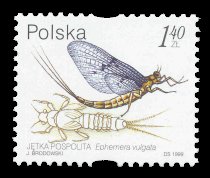 Aquatic insects were the theme for a series of six postage stamps issued by Poland on July 16, 1999. Immature and adult stages in the life cycle of a mayfly (Ephemera vulgata) are depicted on this stamp.