Greek Origins of Name:  Embioptera, derived from the Greek “embio” meaning lively and “ptera” meaning wings refers to the fluttery movement of wings that was observed in the first male Embioptera described. 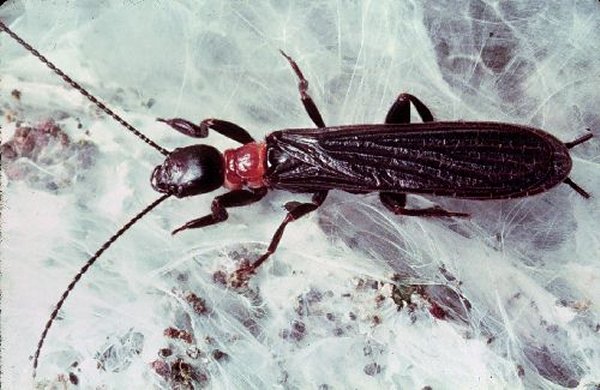 The order Embioptera (webspinners or embiids) is another group within the Orthopteroid complex that probably appeared early in the Carboniferous period. Many insect taxonomists believe webspinners represent another evolutionary “dead end” that diverged about the same time as Plecoptera. Determining phylogenetic relationships for this group is unusually difficult because the Embioptera have a number of adaptations not found in any other insects. The tarsi of the front legs, for example, are enlarged and contain glands that produce silk. No other group of insects, fossil or modern, have silk-producing glands in the legs. The silk is used to construct elaborate nests and tunnels under leaves or bark. Webspinners live gregariously within these silken nests, feeding on grass, dead leaves, moss, lichens, or bark. Nymphs and adults are similar in appearance. Embiids rarely leave their silken tunnels; a colony grows by expanding its tunnel system to new food resources. Well-developed muscles in the hind legs allow these insects to run backward through their tunnels as easily as they run forward. Only adult males have wings. Front and hind wings are similar in shape and unusually flexible; they fold over the head when the insect runs backward through its tunnels. Blood (hemolymph) is pumped into anterior veins to stiffen the wings during flight. In Embioptera, the mouthparts are directed forward (prognathous) rather than downward as in other primitive orthropteroids. This may simply be an adaptation for life in a tunnel, or as some taxonomists have suggested, it may mean that Embioptera are really more closely related to earwigs (order Demaptera). Most Embioptera are tropical or subtropical.

Webspinners have no economic significance. The insects are small, reclusive, and do not feed on living plants.

Only three families are present in North America:

All of these occur in the southern United States and most have fairly restricted ranges.