Greek Origins of Name:  Dermaptera, derived from the Greek “derma” meaning skin and “ptera” meaning wings, refers to the thickened forewings that cover and protect the hind wings. 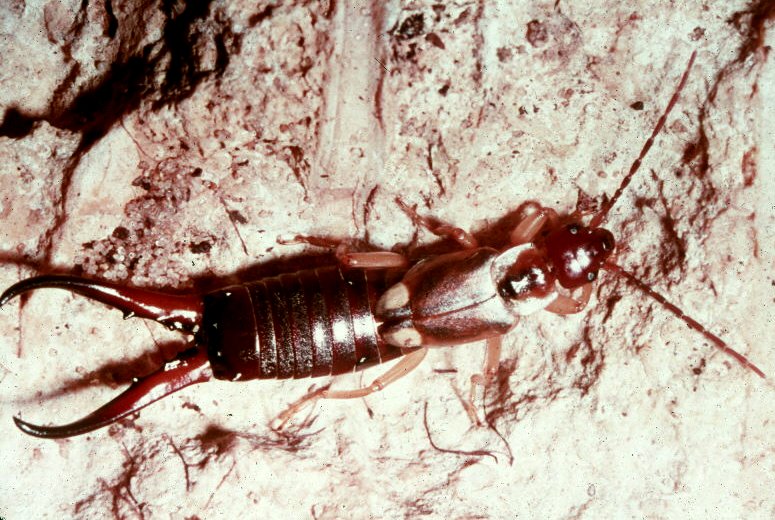 Earwigs are mostly scavengers or herbivores that hide in dark recesses during the day and become active at night. They feed on a wide variety of plant or animal matter . A few species may be predatory. Females lay their eggs in the soil, and may guard them until they hatch. Nymphs are similar in appearance to adults, but lack wings. The front wings are short, thick, and serve as protective covers for the hind wings. Hind wings are large, fan-shaped and pleated. They fold (both length-wise and cross-wise) to fit beneath the front wings when not in use. Some species are secondarily wingless. In most earwigs, the cerci at the end of the abdomen are enlarged and thickened to form pincers (forceps). These pincers are used in grooming, defense, courtship, and even to help fold the hind wings.

The Dermaptera contains three suborders. Most species belong to the Forficulina. The other two groups, Arixeniina and Hemimerina, live in close association with mammals. The former (five species) live on Asian bats and the latter (eleven species) live on African rodents. All of these insects are adapted for a parasitic or semi-parasitic lifestyle: they are secondarily wingless and the cerci are not well-developed into pincers. Members of the Arixeniina give birth to live nymphs (vivipary). 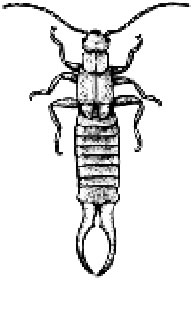 Most earwigs have little or no economic importance. A few species, if abundant, may damage the blossoms of ornamental plants by chewing on stamens or petals. The European earwig, Forficula auricularia,was introduced to the United States from Europe around 1900 and has been known to cause economic losses in fruit and vegetable crops.