Greek Origins of Name:  Blattodea is derived from “blatta”, the Greek word for cockroach. 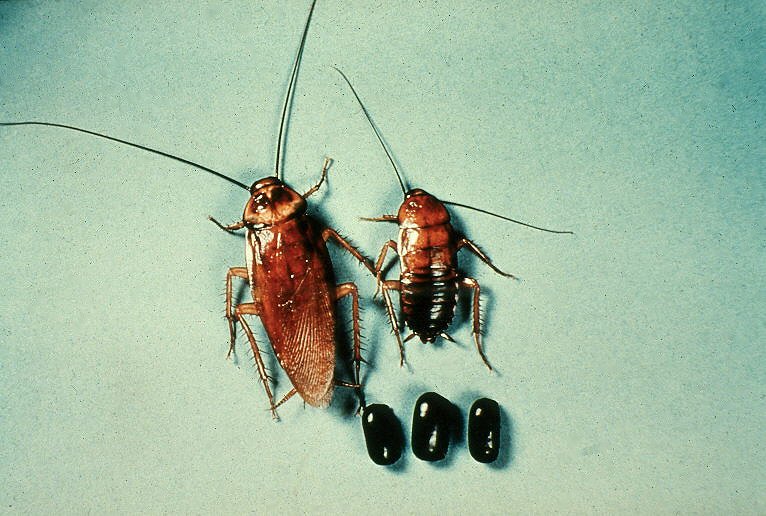 Development:  Hemimetabola, i.e. incomplete metamorphosis (egg, nymph, adult)
Taxonomy:  Polyneoptera, closely related to Orthoptera and Mantodea
Distribution:  Common throughout most of the world, most abundant in tropical and subtropical climates.   Approximately 5 family and 50 species in North America and 5 family and ~4000 species worldwide

The cockroaches, often known as “waterbugs”, are scavengers or omnivores. They are most abundant in tropical or subtropical climates, but they also inhabit temperate and boreal regions. Some species are commonly found in close association with human dwellings where they are considered pests. Cockroaches have an oval, somewhat flattened body that is well-adapted for running and squeezing into narrow openings. Rather than flying to escape danger, roaches usually scurry into cracks or crevices. Much of the head and thorax is covered and protected dorsally by a large plate of exoskeleton (the pronotum).

When cockroaches lay eggs, the female’s reproductive system secretes a special capsule around her eggs. This structure, known as an öotheca, may be dropped on the ground, glued to a substrate, or retained within the female’s body. Production of an öotheca is a special adaptation found only in cockroaches and praying mantids. This similarity suggests a close phylogenetic relationship between these groups and explains why some taxonomists prefer to lump them into a single order (Dictyoptera). 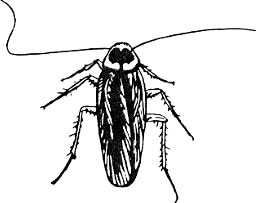 Cockroaches are among the most cosmopolitan of all insect pests. They are associated with human dwellings throughout the world, hiding in cracks and crevices during the day and emerging at night to forage for food and water. Although they do not sting or bite, they are usually associated with unsanitary conditions and may carry a variety of human pathogens on their bodies. The decomposing remains of dead roaches (and their feces) are an important source of household “dander” that becomes airborne and provokes respiratory allergies in sensitive people. But cockroaches also have proven to be very useful as research tools, particularly for the study of insect physiology and toxicology. 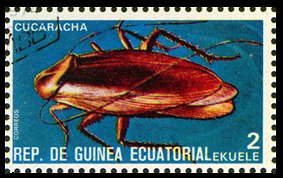 This “cucaracha” is known as the American cockroach, Periplaneta americana, although it is probably a native of Africa. Today, it enjoys a worldwide distribution, living as a close (and undesired) companion to the human species. The stamp pictured here is one of sixteen insect stamps issued by the African country of Equatorial Guinea in 1974.