Greek Origins of Name:  Archeognatha, derived from the Greek “archeo” meaning ancient and “gnatha” meaning jaw, refers to the primitive (monocondylic) manner in which the mandibles connect with the head capsule. 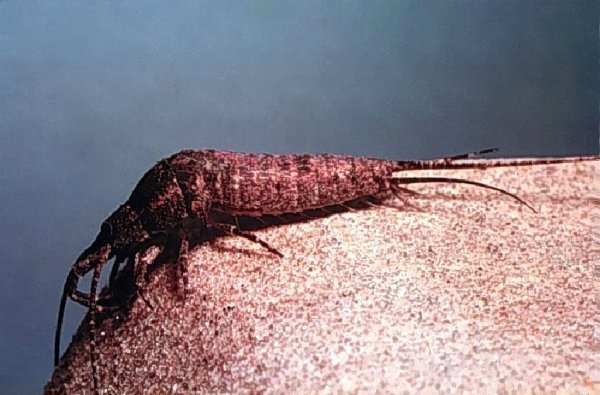 Most bristletails live in grassy or wooded habitats where they are most likely to be found in leaf litter, under bark, among stones, or near the upper tidal line in coastal areas. They are most active at night, feeding as herbivores or scavengers on algae, mosses, lichens, or decaying organic matter.

Sexual maturity is reached after at least eight juvenile instars spanning up to two years. Molting continues periodically even after adulthood. The sexes are separate, but copulation does not occur. Males produce a packet of sperm (spermatophore) and leave it on the ground to be picked up by a female. Females cannot store sperm (they lack a spermatheca), and evidently acquire a new spermatophore before each bout of egg laying. Eggs are laid singly or in small groups (<30). Some species have elaborate courtship rituals to insure that females are able to locate a spermatophore.

Bristletails are common inhabitants of forest leaf litter. They are part of the community of decomposers that break down and recycle organic nutrients. None of the Archeognatha are considered pests.

Machilidae (Jumping Bristletails) — most of the North American species belong to this family. They are common in the leaf litter of deciduous forests and on rocks near the seashore.