Greek Origins of Name:  Protura, derived from the Greek words “proto-” meaning first (or original) and “ura” meaning tail, refers to the lack of advanced or specialized structures at the back of the abdomen. 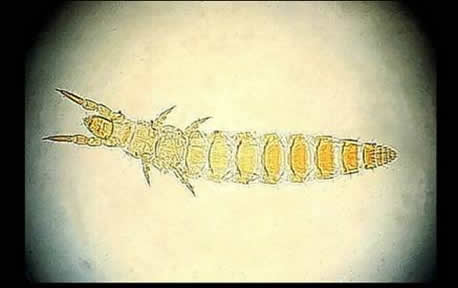 Proturans are usually regarded as the most primitive of all hexapods. They have six legs and three body regions (head, thorax, and abdomen), but they lack most of the other physical features that are common to arthropods. Most species are very small (0.5-2.0 mm) and unpigmented. They are always found in moist habitats — usually in the humus and leaf mold of temperate deciduous forests. Both adults and immatures feed on organic matter released by decay.

Proturans do not have eyes or antennae. The front pair of legs are usually held in front of the body and apparently serve as sense organs. Newly hatched proturans have nine abdominal segments. Each time they molt, another segment is added near the end of the abdomen until they are fully grown (and sexually mature) with 12 abdominal segments. Additional molts may occur during adulthood, but the body does not grow any longer.

Proturans are primarily inhabitants of forest leaf litter. They are part of the community of decomposers that help break down and recycle organic nutrients. None of these arthropods are considered pests.

In North America, the Protura are represented by three families:

All of these families are similar in ecology and habitat.